Would you like to switch to the accessible version of this site?

Don't need the accessible version of this site?

Body image is the mental representation that one creates in their mind, but it may or may not relate to how others see an individual. The skewed view that someone has of their body is a culprit affecting people across the globe, where ethnicity, culture, gender, and age may all fall prey to it. According to ANAD (National Association of Anorexia Nervosa and Associated Disorders), about 30 million Americans suffer from some sort of eating disorder. Eating disorders hold a record for having the highest mortality rate when compared to other mental illnesses; someone dies of an eating disorder every 62 minutes.

Like other mental disorders and illnesses, care should involve a diverse team of experts. It’s recommended that professional caretakers inclu

Due to the severe toll that eating disorders may have on an individual’s physical health, psychological therapy is not enough. It’s also important, if possible, to incorporate family therapy and support groups. Family-Based Treatment, according to NEDA, is a method used for patients who are minors.

In severe cases, inpatient care may be necessary; the person suffering from the eating disorder will be hospitalized or placed in residential care.

If you or someone you care about is suffering from an eating disorder, call the helpline now at 1-800-931-2237. An eating disorder is a serious medical and health concern that needs to be addressed as soon as possible.

The Iceberg theory from Anorexics and Bulimics Anonymous: 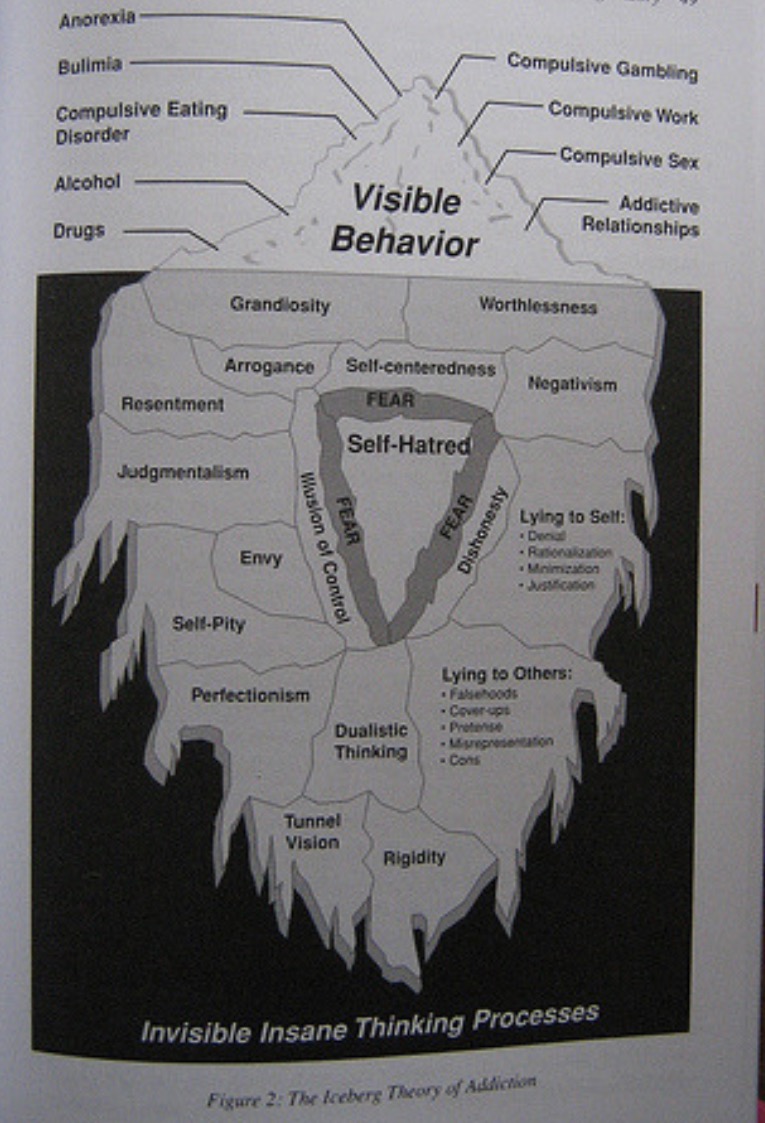 We call this the “Iceberg Theory” of addiction…. We believe that our disease is itself an iceberg and that all our visible addictive behaviors and substances … together comprise the barest tip of the iceberg. It is also abundantly clear that if we do not attend to the underwater part of this monster, we will inevitably switch to another tip when we sober up in anorexia and bulimia.

THE BOTTOM OF THE ICEBERG: INSANITY What is the hidden, underwater aspect of our disease? Therefore, to fully recover … without switching to another addiction, we absolutely must change our insane manner of thinking. …

The Three Primary Colors of Insanity:
Self -Centeredness: Grandiosity & Worthlessness
The Illusion of Control
Dishonesty: With Others and With Ourselves

SELF-HATRED: THE BEDROCK OF INSANITY

Generator of Other Defects
It should be clear to the reader that this pernicious self hatred spawned and fed all our other character defects. To begin with, self hatred itself was inherently dishonest, based on a lie: that we were not good enough. This lie generated another, and another, and another, until we were hopelessly deluded. Believing we were not good enough, we became massively self centered because we needed to figure out precisely how we were flawed so we could fix ourselves. That required much introspection and self absorption. We needed to think about ourselves a great deal. We also needed to launch a major campaign to control other people, for if we could make them think well of us, then perhaps we would begin to accept ourselves. Thinking we were never good enough laid the foundation for perfectionism and was also in iteslf a judgment. In judging ourselves, we simultaneously judged others.
–The Iceberg Theory, pgs. 45-55

The Great Lie: The Illusion of Choice
Behind these words looms the great lie of the disease: I’m doing this by choice. We saw earlier how believing this falsehood keeps us stuck in the vicious cycle of our anorexic and bulimic behavior, because we have to punish ourselves for making such a dreadful “choice.” The Big Book of AA uses the word “choice” extremely rarely, and never in connection with drinking except to say that alcoholics “have lost the power of choice in drink”. Nowhere does the book tell us they will be given back the power of choice once they recover. …